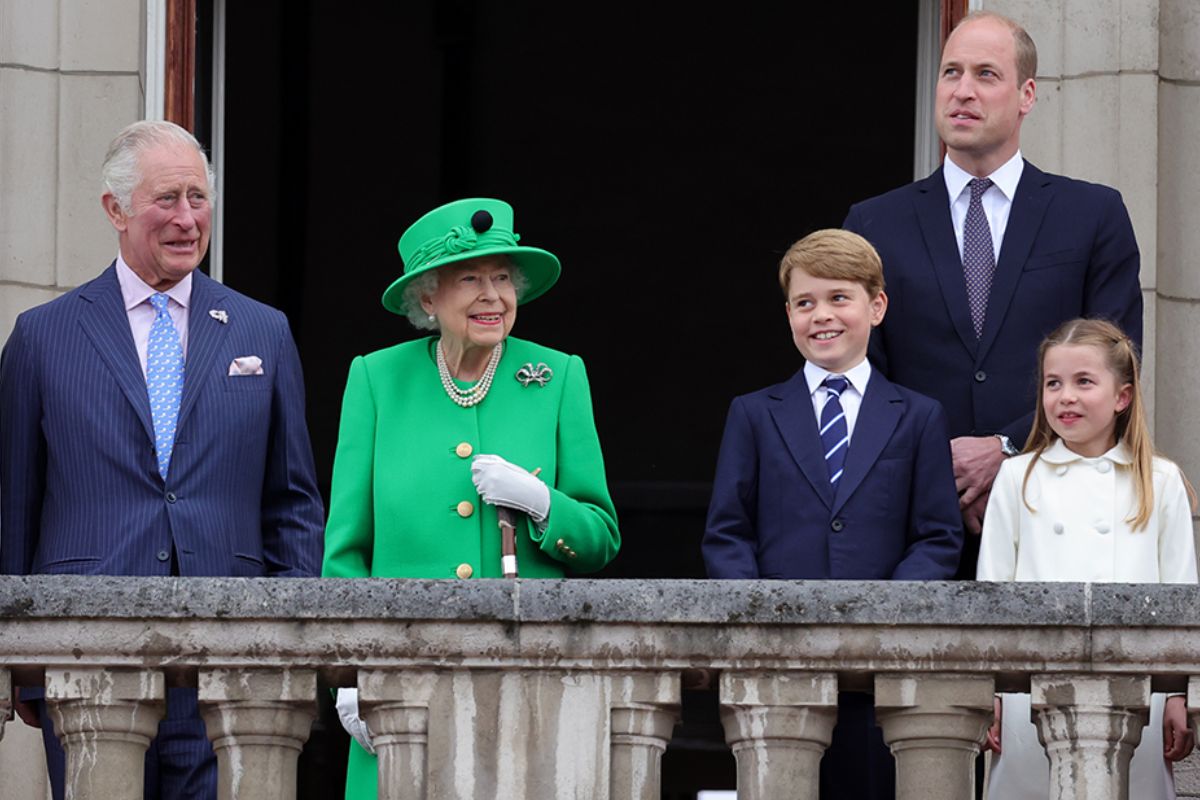 Nobody does dynasty better than the British royal family. The recent days of pomp and circumstance have not only been a celebration of a life well lived. They have been a celebration of the power of the family to transcend death and to link the past to the present and thence to the future. Individual monarchs may die. The institution lives on because of the fusion of biological and social inheritance. The Queen is dead. Long live the King!

It is easy, particularly after watching days of soldiers in red jackets and bearskins, marching bands and union flags, to see the Windsors as an expression of the peculiarities of the British. To a man and a woman, social theorists have predicted that modernity would mean the end of the dynastic principle in the face of democracy and meritocracy. And they have been able to point to the demise of great royal dynasties such as the Romanovs and the Habsburgs. Queen Victoria’s funeral resembled a gathering of crowned heads of state, many of them her relations. At Elizabeth II’s funeral, most of the heads of state were commoners.

Yet dynasty remains a surprisingly powerful force. Dynastic families keep popping up in countries that were founded in revolt against the British monarchy: Think of the Kennedys and the Bushes in America and the Gandhis in India. The Philippines is run by a Marcos and Canada by a Trudeau. The “stans” of Central Asia are virtually family fiefs. China is a land of “princelings,” the children of senior Communist Party leaders, starting with Xi Jinping, who is about to become president for life. North Korea is on its third Kim in a row, with a fourth on the launching pad.

The dynastic principle can be found at its strongest in business. It’s not just that small and medium businesses are family affairs. Giant companies in almost every area of business are either owned or controlled by families: car-making (Ford Motor Co. and BMW AG), media (News Corp. and Bertelsmann SE), tech (Samsung Electronics Co. and Hutchison Whampoa Ltd.), fashion (LVMH and Estee Lauder Cos.), pharmaceuticals (Johnson & Johnson and Merck & Co.) and supermarkets (Walmart Inc and Aldi Stores Ltd). A third of S&P 500 companies and 40% of the 250 largest companies in France and Germany can be defined as family companies in the sense that a family owns a significant share of the company and can influence the appointment of the CEO or chairman.

The dynastic principle injects a collection of problems into the heart of business that are all too familiar from the history of royal dynasties, not least that of the Windsors, or indeed TV soap operas about families. The HBO series “Succession” has rightly won two best-drama Emmys for its portrayal of an aging company founder who refuses to hand over power and plays off his children against each other. Anybody who thinks that this portrait is exaggerated should look at the history of family patriarchs.

Henry Ford terrorized his son and grandson, Edsel and Henry Ford II. Arnold Maersk Mc-Kinney Moeller, the boss of AP Moeller-Maersk, retired at 80 but cast a long shadow over the shipping giant until he died in 2012, aged 98. Sir Run Run Shaw, the chairman of Television Broadcasts Limited, waited until he was 104 to announce his retirement — and then handed his position to his 79-year-old wife. Cyrus Mistry (who tragically died on September 4th in a car accident) found it hard to establish his control over the Tata Group because his predecessor, Ratan Tata, kept second-guessing him and was eventually ousted by the board. Albert Darboven, a coffee tycoon, pushed his son, Arthur, out of J.J. Darboven and tried to adopt a friend as his heir and successor.

Sibling rivalry and family feuds can convulse every family. They are even more poisonous when they are linked to great wealth and great responsibilities. Two of the world’s leading shoe companies, Adidas and Puma, were founded by two warring brothers who set up rival factories in their German hometown of Herzogenaurach. Mukesh and Anil Ambani were at each other’s throats for years after their father, Dhirubhai, died without a will. Koch Industries Inc., the Wichitabased oil, gas and commodities giant, was plagued by a feud between Charles, the CEO and David, his right-hand man, and two other brothers, Bill and Fred, who felt that they were marginalized. If the history of mankind is a history of crimes, follies and misfortunes, as Gibbon said, then the history of family companies is a history of slights, resentments and feuds.

Family feuds are even more poisonous when patriarchs have several wives and/or mistresses. Stanley Ho’s gambling empire in Macao has repeatedly been convulsed by fights over inheritance between the children of his four wives. Mohammed bin Awad bin Laden, the founder of the Saudi Binladin Group and father of Osama bin Laden, had 52 children by 11 wives, turning the family business into a genealogical nightmare. “Dynasty” prepared the way for a follow-up by suggesting that the patriarch was preparing to have more children because he didn’t think the ones he already had were up to it.

Given the tangle of emotional problems that family companies can often entail, their survival might seem to be remarkable. Yet they are not only surviving but thiving. I would venture that in the future, family companies will account for an even bigger proportion of the capitalist system than they do today.

Family companies have all sorts of upsides that make up for their downsides. By their very nature they overcome two of the biggest problems of modern capitalism: the “agency problem” and short-termism. Family members keep a vigilant eye on the performance of professional managers. They also habitually take a longer-term view of the good of the company. What do quarterly results matter if you have been in business since 1385 (like the Antinoris) or 1526 (like the Berettas)? In the rich world, family companies excel at curating high-quality products that require a lot of patience. The world’s best newspapers such as the New York Times and the Wall Street Journal are owned by families. In the emerging world, they excel at making bets on new technologies.

Family companies are repositories of family traditions and family loyalties. Companies of all sorts have taken to telling stories about themselves and their products in order to differentiate themselves from their rivals. Most family companies can tell stories that are far more compelling than the ersatz products of corporate public relations departments. Companies work hard to create loyalty among their employees. Family companies often extend their sense of family to their employees and even their communities: When Michele Ferrero, the founder of the company that gave us Nutella, died, people lined the streets of his hometown, Alba, in their thousands, many of them weeping.

Family companies frequently have better political connections than other types of companies, most notably in the emerging world. Tata was an engine of nation building during the British Raj. Samsung and the other chaebol were responsible for the “miracle on the Han River” that transformed a war-torn backwater into an industrial powerhouse.

They also have two important things on their side. The first is that they are particularly common in the most fast-growing areas of the global economy such as India, Indonesia and the Philippines. Families with names like Rothschild and Baring played a leading role in creating modern capitalism during the era of Western dominance. Families with names like Godrej and Lee will play an equally prominent role in recreating it in the age of Easternization.

The second is that they are developing ways of minimizing their weaknesses (particularly the “clogs to clogs in three generations” curse) and capitalizing on their strengths. Arguably, family companies are undergoing a revolution in their management capacities similar in size and scope to the revolution that regular public companies went through a hundred years ago.

Here are some of the emerging rules of successful business families and family companies:

1. Decide what they want out of their businesses rather than dithering about between various contradictory models. The Boston Consulting Group argues that families can adopt three approaches toward their businesses. They can be owner-managers who occupy executive roles. They can be activist investors who provide broad strategic guidance and selective intervention. Or they can be passive owners — living off dividends and nominating professional managers who are left to run the company free from interference. The 680 members of the Haniel clan (who once owned Metro supermarkets) have even adopted a self-denying ordinance which stipulates that no member of the family can work for the company, not even as an intern.

The correct approach may change over the years: First-and second-generation family members may demand to be owner-managers whereas third- and fourth generation members may prefer a more distant relationship.

3. Adopt formal measures that can deal with potential conflicts of interest and clashes of personality. They have family constitutions that lay down the rules of engagement, shareholder agreements that regulate what shares they can sell, family assemblies that provide forums for the family at large and family councils that oversee the running of the business, and even family codes of conduct which prescribe how family members should behave (the Trump family has specific rules governing religious tolerance, modesty and respect for others). Getting these constitutional arrangements right is particularly important for big, sprawling families that have lots of branches and lots of different generations, all of which might have diverse interests and differing perspectives.

4. Reinforce “hard” measures with plenty of soft ones. Some families put aside a house for family reunions, often the home of the family founder, or organize regular holiday camps where their children mingle. Some families employ chief emotional officers, or ombudsmen, or external councillors to address soft issues. Others bring in psychologists or even psychiatrists to untangle some of the most difficult emotional tangles. In Boston, a group called SOBs (sons of bosses) has come together to discuss their “daddy issues.” Even the hard-bitten Rupert Murdoch has organized a group therapy session for his children and their spouses, presided over by a counsellor who specializes in dynastic families.

5. Embrace meritocracy to the extent that you can in a dynastic world, insisting that family members meet demanding standards if they are to ensure their position in the firm and, if you’re cursed with sub-optimal heirs, bringing in professional managers. Some companies restrict family members from working under the direct supervision of other family members. Others provide their children with seed funding to start a new venture in order to gain entrepreneurial experience. The ROI group, an Australian investment business that embraces four generations of the Owens family, demands that all family members work in non-family companies at the start of their career, and that they can only be given jobs in the company if they are approved by the owners’ board, which represents the family, and the advisory board, which represents outside advisers.

Elizabeth II liked to refer to her family as “The Firm” because it went about the business of majesty in such a business-like way. There are millions of other firms out there that try to combine rational demands of business with the emotional ties of family life. The Windsors are undoubtedly unique — born to immense privilege but also condemned to live their lives in a gilded cage — but they also sit on the top of a pyramid of dynastic families that have inherited their positions because of the luck of their genes — the “lucky sperm club” as Warren Buffett once dubbed it — but who nevertheless play a vital role in keeping the modern economy rolling ahead.

India on the cusp of a capex boom: Morgan Stanley