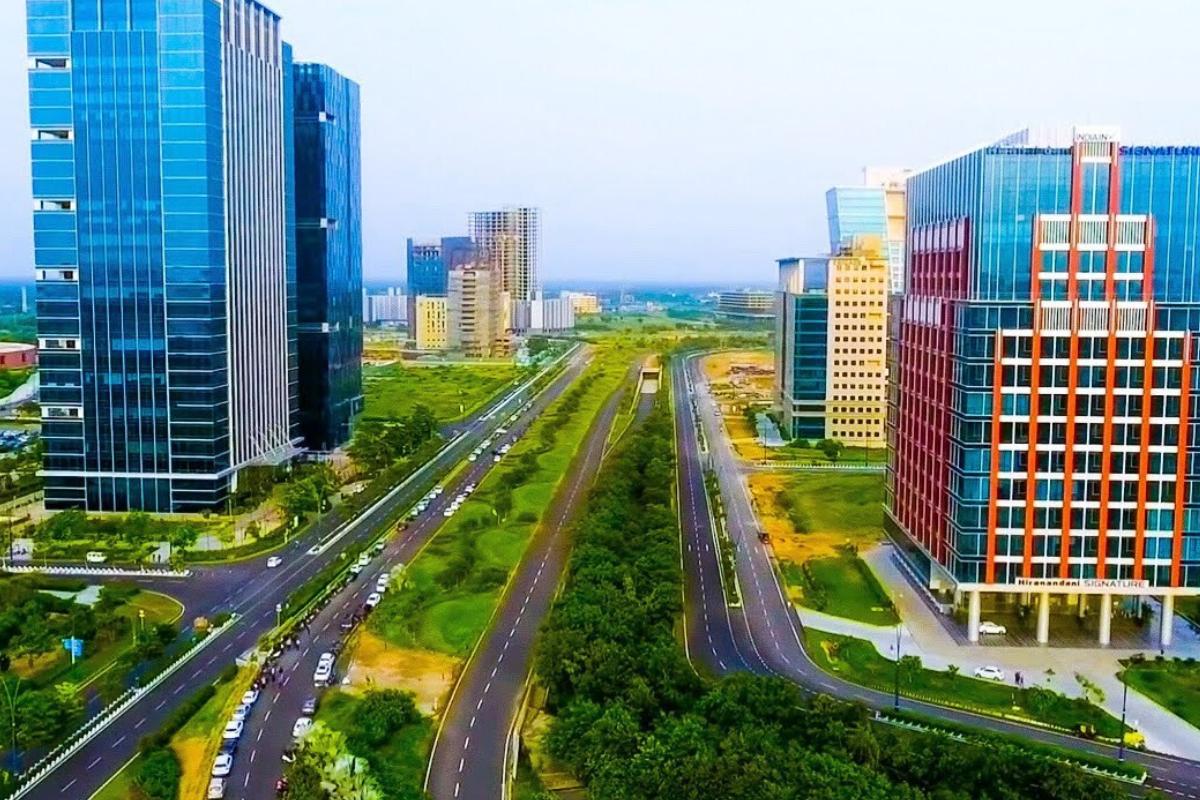 India’s newest financial hub is rising from scrubland near the banks of the Sabarmati River once dominated by marsh birds and grazing buffalo.

In the state of Gujarat, just a few glass-fronted towers greet the 20,000 employees of companies such as JPMorgan Chase & Co. and HSBC Holdings Plc who commute in each weekday. Its full name is Gujarat International Finance ¬Tec-¬City, but it’s more commonly known as GIFT City. It occupies 886 acres between Gujarat’s capital, Gandhinagar, and Ahmedabad, its biggest city. As of October, bankers managed a combined $33 billion here.

What’s drawing these companies? An exemption from the many rules and taxes that hamper business and trading in the rest of India. GIFT City is an experiment in free markets nestled inside a $3 trillion economy—one of the world’s fastest-growing—that’s long been reluctant to let its national currency, the rupee, become a plaything of international investors. The goal is to create a welcoming place where India-centric trading that’s moved to Dubai, Mauritius or Singapore can return home.

At first, Gujarat seems an unlikely location. On India’s west coast, it’s the ninth-most populous state—and, as a mark of respect for Mahatma Gandhi, who was born in Gujarat, it bans the sale of alcohol, that lubricant for many a financial deal. Narendra Modi started planning GIFT City in 2008, when he was still the state’s chief minister, and his ascension to prime minister in 2014 allowed him to give the project more policy help and a higher profile. In a July speech to bankers, regulators and executives from India and overseas, he proclaimed that “the vision of India’s future is associated with GIFT City.”

Modi’s government has offered an array of incentives, including a 100% tax holiday for a decade to businesses that set up within the hub’s International Financial Services Center, or IFSC. Rules are being tweaked to encourage Indian companies to lease ships and aircraft through GIFT City rather than on foreign shores. Foreign universities will eventually be allowed to bypass regulations to open local campuses, and companies can use an international arbitration center to avoid India’s notoriously poor contract enforcement mechanisms.

A key concern that the financial center seeks to address is India’s lack of full convertibility of its currency. Converting money into foreign currencies requires cumbersome documentation, and that’s pushed trading in rupees and rupee–denominated financial assets to offshore centers that Indian regulators can’t monitor. But within GIFT City most of these rules don’t apply, enabling onshore trading in key currency derivatives contracts, which can counteract some of the effects that offshore trades have on the rupee exchange rate.

Another product has migrated to the financial center: a popular derivative based on a benchmark gauge of Indian stocks that was traded on the Singapore Stock Exchange. In 2022 the National Stock Exchange of India opened a cross-¬border trading link with Singapore—similar to the Hong Kong-Shanghai connect—to allow global investors to trade stock derivatives listed on the Indian market without needing to set up shop in India.

Trading volumes have increased since a single regulator, the IFSC Authority, was created by the Indian government in 2020 to streamline approvals and oversight in the special economic zone. In October, average daily turnover on the two stock exchanges in the financial center climbed to $14.6 billion, from $3.4 billion two years before, cumulative derivative transactions by banks jumped to $466 billion, from $22 billion, and cumulative banking transactions rose to $303 billion, from $45 billion.

“Beyond the shores of India, in some of those centers where India-centric business developed, they are able to notice that something is happening, and things may not be the same in the future,” says Injeti Srinivas, the IFSC Authority’s chairman. “Business is gravitating toward IFSC.”

A new international bullion exchange will let qualified jewelers directly import gold to India through GIFT City, a change from current rules permitting only some banks and nominated agencies approved by the central bank to do so. That loosening of restrictions is set to widen the importer base in India, the world’s second-biggest consumer. An aircraft leasing and financing business is operating in GIFT City to tap into the demand of one of the world’s hottest aviation markets for new-plane orders. Ship leasing will start soon.

In July, JPMorgan and Deutsche Bank AG started operations in GIFT City. JPMorgan will initially offer clients ¬foreign exchange derivatives and wants to leverage its position as one of the largest suppliers of physical bullion in the country. Deutsche Bank aims to tap the rising number of companies in India that need cross-border banking services, ranging from hedging to financing. (In 2018, Bloomberg LP, the owner of Bloomberg Markets, entered into an agreement to provide capital markets expertise to GIFT City.)

“We think the GIFT City policy is a calibrated approach toward internationalization of the rupee,” says Srinivasan Varadarajan, a managing director in global emerging markets at Deutsche Bank in Mumbai. “It is similar in some characteristics to what has been seen in Asia over the last decade.”

Jaxay Shah, founder and managing director of property developer Savvy Infrastructure Pvt., is among the people betting on this growth. His company, which built the tower that houses Bank of America Corp. offices and the IFSCA’s temporary headquarters, has purchased two nearby plots to double its holdings in GIFT City. “When else in my career would I get this kind of smart city, where there is an economic vision and no red tape?” Shah says.

GIFT City is the first in India to offer district cooling, an energy-efficient air conditioning system, as well as central waste, water and electricity management. Although it offers beautiful streets and boulevards and pristine sports centers, plus recent additions including a school and a hospital, workers tend to disappear in the evenings, taking electric buses to homes in nearby cities that have amenities such as cinemas and fast-food restaurants.

Some younger executives in Mumbai, Delhi and Gujarat, who asked not to be identified because they weren’t authorized to comment, say they’re often questioned on calls about whether alcohol will be permitted. Multiple policymakers and lawmakers told Bloomberg Markets that they expect authorities will provide yet another rule exemption—to allow licenses to buy and consume alcohol. The state government realizes it needs to amend its teetotaler requirements to attract residents and ensure the project’s success, they say.

And that, in a nutshell, is the story of GIFT City: an oasis in which companies can escape India’s rules and bureaucracy. An attempt to lure billions of dollars back to onshore markets. A “sandbox” in which fintechs can play with new products with seamless links to global systems. Perhaps even a vision for India’s future.