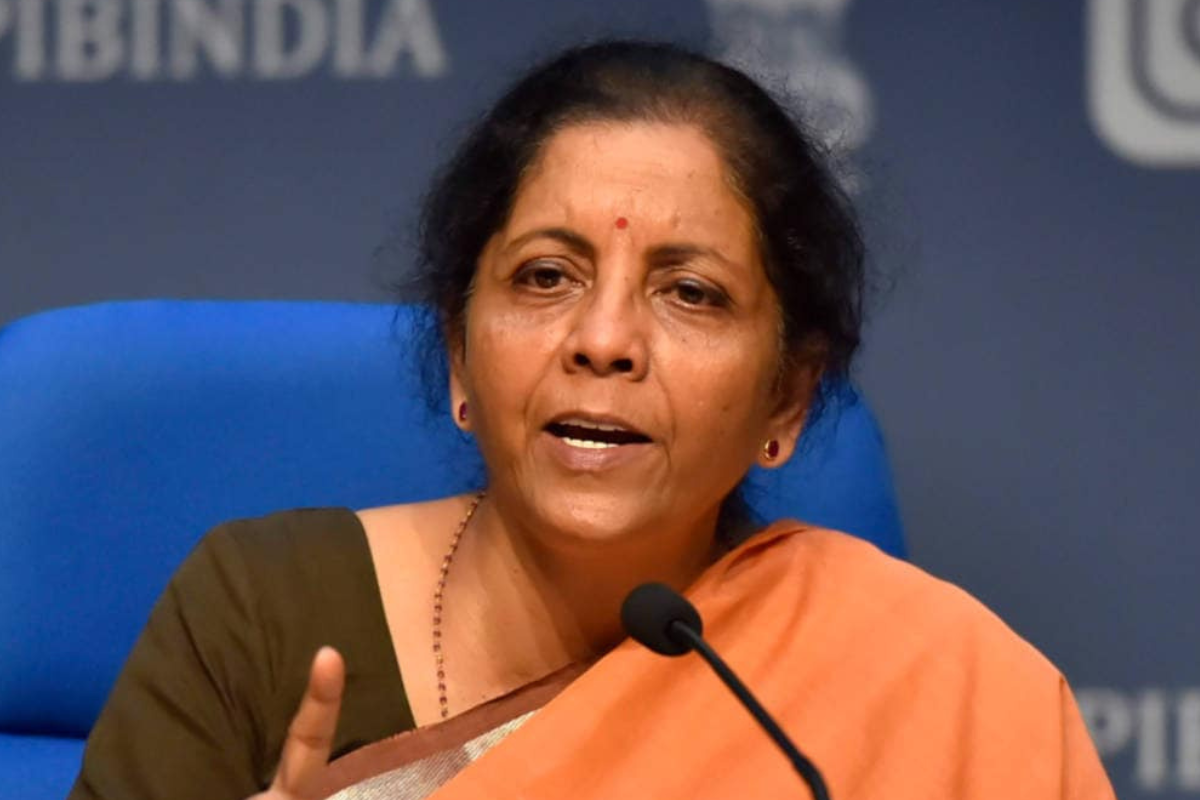 Last Tuesday, finance minister Nirmala Sitharaman asked India’s corporate honchos why they were not investing in the Indian economy.

“I want to hear from India Inc,” she said, “what’s stopping you when countries and industries abroad think this is the place to be.”

This is a valid question. In this piece, we will try and piece together why India Inc, as corporate India is often clichély referred to, is not investing in the Indian economy and what are the reasons behind the same.

The problem of low investment in the economy isn’t a recent phenomenon related to the spread of the Covid pandemic. It has been around for a while and is more than a decade old.

Household investment to GDP is a good proxy for the small informal businesses operating in the economy. And given that it has been falling, what this tells us is that the informal businesses haven’t been doing well and have been shutting down or shrinking.

Most recently, they have been impacted by the Covid pandemic and a botched-up implementation of the goods and services tax. As Hindustan Unilever Ltd, one of the largest fast moving consumer goods companies in the country, said in its most recent earnings call: “We continue to gain value and volume shares in more than 75% of our business.” This is a reflection of an increasing formalisation of the economy.

In the period between 2003 and 2013, the Indian corporates went on a borrowing binge accompanied by frenzied expansion. Private corporates wanted to be ready to cash in on India being the next China.

In the process, they ended up borrowing more than they could possibly repay and building excess capacity as well.

As per the Reserve Bank of India’s quarterly order books, inventories and capacity utilisation survey, or OBICUS, the capacity utilisation of manufacturing companies in the three-month period ending March 2022, which is the latest data available, stood at 75.3 percent. A similar kind of capacity utilisation has been seen regularly over the last decade, clearly pointing to the fact that there is excess capacity in the economy.

In this scenario, it doesn’t make much sense for private corporates to invest and expand. If the private sector can fulfil consumer demand with its current capacity, why will it go about building new capacity?

Ultimately, any corporate firm reacts to the incentives at play. Currently, there isn’t enough incentive for private corporates on the whole to invest and expand.

In fact, this lack of creation of new capacity can also be seen in the lending carried out by commercial banks to industry.

Bank lending to industry peaked in 2012-13 at 22.43 percent of the GDP. it has largely fallen since then, standing at 13.32 percent in 2021-22. This was primarily due to excess enthusiasm in lending shown by banks and excessive enthusiasm in borrowing shown by private corporates during the period 2003-2013.

The implication of this was a massive rise in bad loans of banks. Bad loans are largely loans that haven’t been repaid for 90 days or more. They peaked at Rs 10.36 lakh crore as of March 2018, with corporates being responsible for nearly three-fourths of the bad loans.

This leaves us with public sector investment in the economy, which has varied largely between seven to nine percent of the GDP in the last two and a half decades. In 2020-21, the latest data point available, it stood at 7.2 percent of the GDP. What this means is that investment by the private sector and households has fallen and is holding the economy back.

The question is, why is this the case?

In the case of households, as mentioned earlier, the increasing formalisation of the economy is hurting small firms. In the case of the private sector (read corporates), one reason is the excessive borrowing binge that led to excess capacity creation. At the same time, the consumer demand needs to catch up to the excess capacity that was created – and that cycle is yet to completely play itself out.

Second, corporates invest when they are confident that their investment will lead to future gains. That confidence has been missing for a while. Take a look at the following chart which plots the new investment projects announced by the Indian private sector over the years.

Also, as economist and former deputy chairman of the Planning Commission, Montek Singh Ahluwalia, put it in a recent column in the Mint: “Some large houses have announced some large investments. This is good, but announcements by a few large houses will not correct the underlying problem of a much broader slowdown in private-sector investment.”

So, why is the private sector not investing? The answer perhaps lies in the fact that the average Indian consumer has been feeling the heat on the financial front for a while now.

First, a two-wheeler is typically the second- or third-most expensive thing most individuals buy in their lifetime. And the fact that two-wheeler sales in 2021-22 were almost the same as the sales a decade ago tells us that the average individual isn’t really in a position to commit money towards buying a two-wheeler. This reluctance largely stems from the lack of confidence in the economic future.

A major reason for this is the lack of job creation. Data from the Centre for Monitoring Indian Economy points out that the labour participation rate in 2016-17 stood at 46.2 percent. By 2021-22, it had fallen to 40.1 percent. This fall started before the Covid pandemic struck.

Hence, many people simply dropped out of the labour force because they were not able to find jobs over a period of time and stopped actively looking for jobs. And without jobs, purchasing power is bound to take a beating.

Second, if the sale of two-wheelers is similar to what it was around a decade ago, why would any company invest in new capacity? Domestic two-wheeler sales peaked in 2018-19 at 21.2 million units. Given that, there is a lot of capacity currently lying idle in the two-wheeler industry.

Further, the domestic two-wheeler sales this year from April to August stood at 6.6 million units – higher than the similar periods in 2020-21 and 2021-22, but lower than the years before that. Clearly, capacity is not a problem with the two-wheeler industry right now. Hence, there is no incentive to invest and expand.

Analysts and economists who want to project how well the Indian economy is doing tend to refer to booming car sales. There is no denying that car sales have rebounded much faster than two-wheeler sales, but saying that there is a boom in car sales is stretching the truth quite a bit.

Another point that needs to be made here is that there has been a fall in the sale of entry-level cars. In 2018-19, domestic sales of mini and compact cars (from 3,201 mm to 4,000 mm) stood at around two million units. It has since fallen to 1.4 million units in 2021-22. What this clearly tells us is that the financial strength of households, that could have possibly moved from owning a two-wheeler to owning the most basic model of car, has come down in the last few years. Also, the capacity to produce entry-level cars is not a problem.

Further, the sale of the more expensive multi-utility vehicles has gone up from around 0.9 million units in 2018-19 to around 1.5 million units in 2021-22. This tells us that the rich have come out richer post the pandemic. Of course, given the fact that the sale of multi-utility vehicles has more than doubled in the last few years, it is hardly surprising that there is a huge waiting period for these cars. This is a great example of how financial inequality has gone up over the years.

After peaking in 2017-18 at around 91.09, the mobile tele-density in the country has been falling. This means that every 10,000 individuals in the population on an average owned 9,109 mobile phone connections. This fell to 83.07 in 2021-22. A substantial portion of this fall happened before the Covid pandemic struck.

What this tells us is that many individuals have given up on more than one mobile phone number that they used to have as their finances have become stretched.

So, the average Indian consumer is financially stretched. Another reason for this lies in the fact that previously, the growth in household investment feeded into the growth in private investment. Household investment went up when the informal sector did well. When this happened, the consumption demand went up, leading to the private sector doing well and investing more.

Of course, the well-to-do sections of the population continue to do well and that is reflected in several economic parameters too. Private corporates obviously understand this, and that reflects in their investment decisions, irrespective of what they say in public when asked about economic growth. Their real revealed preference is different.

The finance minister in her address had also said that foreigners are betting big on India.

The net foreign direct investment (FDI) figure is obtained by taking the FDI that foreigners bring into India in a given year and subtracting their repatriations during that year. As we can see, the net FDI as a proportion of the GDP has been flattish over the years after peaking at 3.5 percent of the GDP in 2008-09. In 2021-22, it stood at 1.8 percent of the GDP.

Nonetheless, in absolute terms, the net FDI number has gone up in the last few years. It peaked at $56.2 billion in 2021-22 and it is perhaps this that the finance minister was referring to in her address.

So, that leaves us with the final question: What are private corporates doing with the profits they have made over the years, especially given that they have earned bumper profits over the last two years thanks to increasing formalisation, lower interest rates, smart cost cutting, and a cut in the corporate income tax rate implemented in September 2019?

Economist Mahesh Vyas analysed 3,299 non-finance companies, of which 2,509 companies are listed and the remaining unlisted. These account for around 60 percent of sales of the 25,000 companies that the Centre for Monitoring Indian Economy’s Prowess database follows. These companies made a superlative net-profit of Rs 6.7 lakh crore in 2021-22, much more than any of the previous years. This money did not go into the creation of new capacities.

What this means is that while companies remain confident in the fact that sales will continue to recover from their Covid lows, nonetheless, at the same time, they don’t see sales growing fast enough to put their existing capacity to produce goods and services under pressure. Hence, there is no need to invest. The private sector has very little incentive to borrow and expand. And that’s the long and the short of it.

Written by Vivek Kaul. Kaul is an economic commentator and the author of Bad Money.